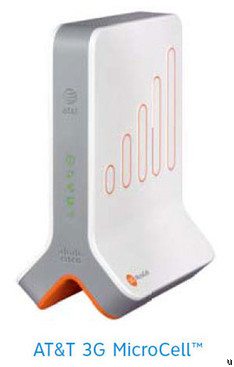 Yesterday I made my first cell phone call from my house ever.  We’ve had cell phones since the mid 1990’s and tried all the major service providers – they were all the same, zero to one bar.  Our house is just in a dead zone.  I’ve talked with many sales reps about ways to boost their signal and none of them ever had a good solution.  I’ve talked with all our techie friends, scoured the internet and found something call a cellular repeater, but they seemed like a fairly expensive solution and there was no guarantee that it would work.

In mid-april AT&T rolled out nationwide a 3g microcell.  Maybe you have heard about it already. I heard about it Tuesday, bought one Wednesday, installed it Thursday and made my first call that day.  It was a relatively simple installation and we now have 5 bars on all of our phone throughout the house.  We are ecstatic about how well it works.

When I bought the device the representative told me that since they release they sell several per week.  In fact he thought the the store in Norwell (where we live) is one of the top sellers of the device in the country.  So why isn’t AT&T marketing this device?  It’s because all of their major advertizing is about how great their coverage is.  If they market the 3g microcell they are admitting that there are weaknesses in their coverage.

How silly is that!  There is information all over the web about poor coverage – obviously not from AT&T – but from cell phone users all over the place.  Isn’t this what social media is all about, being real and sharing information?  With all the information being shared on web do they really believe that everyone believes their marketing?  I don’t.  I think that it would be a much stronger message for them to promote that they solve problems and makes live easier for everyone that uses their services.

What message is your organization sending?  We recently were helping an organization that put a minimum donation amount, to encourage larger donations.  There were several requests from people on how they couldn’t send the minimum but wanted to send something.  What message did this send to them?  Sorry your help isn’t significant enough for us.  I don’t think that is the message they wanted to send, but that is the result.

What messages are you sending to your potential donors and supporters?